In 1957, Denham Springs became a city, and, by 1969, the growing municipal government needed more space and moved to a new government complex, it’s current location at 941 Government Drive. The police department took over old City Hall, and, at some point, the Louisiana State Police built an annex on the east side of the building for use as a driver’s licensing bureau. Over time, rooms were partitioned, additional jail cells were added, and the exterior was painted different colors. The police occupied the building until they moved to a new police station in 1984. For a period of time in the 1990s it was used as a haunted house by the police cadets; the interior walls were defaced, and a crude wooden sign declaring it “House of the Macabre” was erected on the front of the building.

In March, 1995, Mayor James Delaune, Sr., announced the establishment of a commission whose primary duty would be to preserve the historic buildings in Denham Springs. The Denham Springs Historic Preservation Commission held its first meeting April 3, 1995, and identified its top priorities to be the establishment of boundaries for the downtown historic district Old City Hall.

The commission applied and was approved for participation in the Louisiana Main Street program. Over the next few years, the Historic Preservation/Main Street Commission held numerous events to raise funds for the renovation of Old City Hall and raise public awareness of the need to preserve the structure.

Preliminary preservation improvements were made to the building, but a lack of adequate funds stalled the project for over a decade. Finally, in August, 2007, city finances improved, and the Denham Springs City Council allocated the funds for a total renovation inside and out that included restoring it to the original colors that emphasizes its art deco style.Old City Hall at 115 Mattie Street in the old downtown district was rededicated and reopened to the public on April 17, 2009.

This stately building, on the National Register of Historic Places, is once again a magnificent structure and serves as a City Welcome Center & Museum. It is open for public tours Monday - Friday from 8 a.m. - 5 p.m. Civic organizations are invited to hold meetings at Old City Hall. Call the office at 225-667-7512 to schedule a meeting or tour.


-- Courtesy of Denham Springs Main Street and the preservation of Old City Hall. 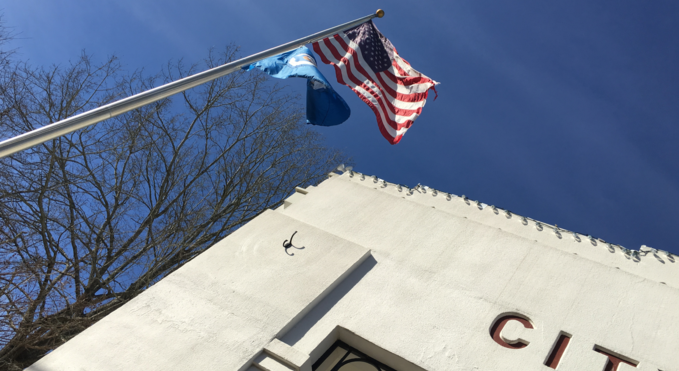 Denham Springs’ Old City Hall was constructed in the late 1930s and completed in 1940. On Nov. 21, 1940, the magnificent new building on Mattie Street was opened to the public for tours. Then-Mayor Gay Cooper praised the quality and style of the building, with its bright white paint and colorful trim. Built under the auspices of the WPA under the administration of President Franklin D. Roosevelt, the two story building was constructed of poured-in-place concrete reinforced with steel. For the first time, Denham Springs had a dedicated facility to house the mayor’s office, town hall, town council chambers, police headquarters, jail, a courtroom and a library. Previously, mayors had not had offices and had worked out of their homes.